Menu
Search
Personal menu
Back to all 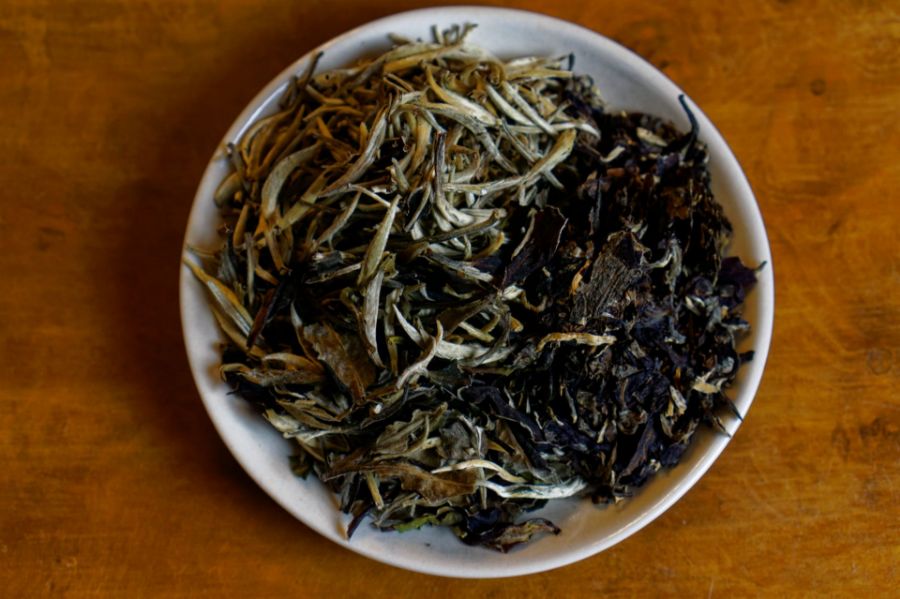 The different kinds of white tea are:

This is by no means a full list of all white teas in the world.

White tea is processed using only simple methods such as drying and wilting, which results in a tea which remains true to its natural character.

In ancient times, it was common for white tea to be either powdered or pressed into bricks before being sold. Although there are distinct trade and storage benefits to these methods, nowadays it is more common to find white tea in loose-leaf form.

This type of tea is known for having a soft, yet delicate aroma and flavor profile, often with notes of flowers, fruit, and hay.

“The fragrance of white tea is the feeling of existing in the mists that float over waters”
- C. JoyBell C

Fuding (福鼎市) is located in Fujian Province of China.

It is often considered to be the birthplace of white tea and the classic "da bai" tea varietal is native to the region.

Yin zhen bai hao (白毫銀針) is made using only the top buds of the tea plant. These buds are typically long, slender, and silver in appearance, giving the tea a strikingly high-end appearance. To be considered true yin zhen bai hao, the material should be uniform in shape, without any stems or leaves.

This is considered a first-grade Fuding white tea and is often the most expensive variety of white tea sold on the open market.

When brewed, yin zhen bai hao has a golden color and a light, sweet taste with notes of flowers and wood.

Bai mu dan (白牡丹) is made by combining young buds and leaves of the tea plant.

It is considered a second-grade Fuding white tea, which means it's typically less expensive than yin zhen bai hao.

When brewed, bai mu dan has a pale green color and stronger, fuller flavor than yin zhen bai hao, while retaining many of the same delicate flavor notes.

Gong mei (贡眉) is considered a third-grade Fuding white tea and is harvested later in the season than bai mu dan.

When brewed, gong mei is golden-yellow in color and has a floral, yet savory flavor.

Shou mei (寿眉) is considered to be a fourth-grade Fuding white tea and is thought to rank under gong mei.

It's generally harvested later in the season from leaves which don't meet the standards for higher grades.

This type of tea often has a rough appearance, but it's not necessarily a bad tea.

When brewed, shou mei has a bolder and darker flavor due to being harvested a little later in the season.

The Yunnan Province in China, an area well-known for its pu-erh tea production, also harvests and processes white tea.

Yue guang bai (月光白) is a variety white tea which originates from the Yunnan Province of China, making it slightly different than the other teas on this list.

Its name comes from the traditional processing method of withering the tea leaves at night, or under the moonlight, rather than in the sun.

The raw leaves for this tea are sourced from the "big leaf" varietal, which is native to Yunnan and is more often used to produce puer tea.

Although this type of tea was traditionally dried under moonlight, this is thought to be cost-prohibitive in modern times. Most modern yue guang bai teas are dried indoors because it produces similar results at a much lower price point.

When brewed, yue guang bai has a soft, malty flavor and a smooth, creamy texture. Its flavor profile often has floral and fruity notes, with hints of maple sap and sweet hay.

There are variations of pu erh trees that have the hairy bud mutation just like fuding white tea. These are processed like the Fuding Silver needle but carry a bit more oomph.

Ceylon white tea is a type of white tea that is grown and produced in the island nation of Sri Lanka, which was formerly known as Ceylon.

When brewed, Ceylon white tea is known for its light, golden color and is often described as having a floral aroma and a smooth, delicate flavor.

Darjeeling white tea is a variety of tea produced in the Darjeeling district of West Bengal, India.

Himalayan white tea is a variety of tea that is grown and produced in the Himalayan region of India and Nepal.

When brewed, the flavor profile of Himalayan white tea is crisp, floral and sweet.

Malawi white tea is a type of white tea that is grown in Malawi, a country in southeast Africa.

When brewed, Malawai white tea is elegant, with notes of fruit and honey.

Check out the white teas we carry.